Widening the RI Wage Gap with an "Equal Pay" Bill

If General Assembly leaders thought paying lip service to women’s rights would satisfy Rhode Islanders, the past two weeks have proven them sorely mistaken. In the short time since legislators concluded their business, their failure to act on separate bills addressing sexual harassment in the workplace and reproductive rights – along with the Democratic Party’s refusal to endorse three progressive women incumbents for office – has generated enormous political controversy.

Yet despite all this controversy, one of the most stunning actions taken by the House of Representatives on women’s rights during the session’s final days has hardly been mentioned: the overwhelming support by House members for a bill that would have WEAKENED the state's existing equal pay law. When an anti-discrimination bill is gutted and transformed into one that rolls back civil rights protections – when 66 legislators are willing to turn the clock back on women’s rights and call it progress – it is no surprise that women’s rights in general were treated so badly. 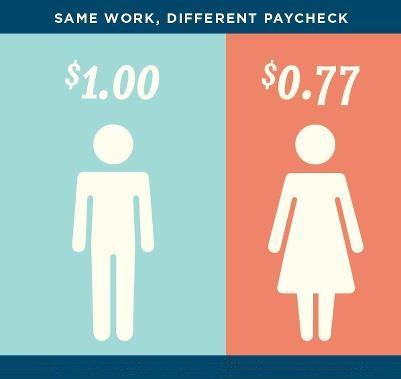 Rhode Island's existing equal pay law, barring “Wage Discrimination Based on Sex,” has not been updated in more than a half of a century, and it shows. It is a very weak law.  This year, bills introduced in the both the Senate and the House sought to strengthen the current law in various ways and help close the well-known workplace wage gap between men and women. Based on a Massachusetts law, the Senate “fair pay” bill, sponsored by Sen. Gayle Goldin, passed the Senate unanimously.

On the House side, it was a different story altogether. When the House bill finally made its way out of Labor Committee in late June, it had been revised so dramatically that the advocacy groups behind the legislation ended up opposing it.  The revised bill actually made the existing equal pay law worse - in many important ways, and in ways that were specifically noted during the debate on the House floor. It was thus all the more astonishing when the House not only passed the bill overwhelmingly, but passed it with the support of 19 of 23 female members. We will leave it up to readers to ask their legislators, some of whom have undoubtedly faced wage discrimination in their own lives, why they voted against the interests of women in this way.*

In the meantime, here's a look at how this amended bill undermined the current law:

It is true that the bill did contain a few additions to the current law: it barred wage discrimination on the basis of race or color as well as sex, and included a general ban on asking job applicants about their salary history, but the whole thrust of the House-passed bill was to leave unprotected tens of thousands of employees currently protected by the Act.

Compromise is the name of the game at the General Assembly. But when a bill to promote fair pay for women is used as a vehicle to undermine equal rights – and when it does so with the acquiescence of over 80% of the House of Representatives – something is terribly wrong. Unless we come to grips with this vote, it is hardly puzzling to see a lack of progress on other issues of gender equality.

In the meantime, the nine Representatives who voted against the bill deserve a shout-out for refusing to waver in the fight for equal rights: Reps. Edith Ajello, Raymond Hull, Jason Knight, Jared Nunes, Jeremiah O’Grady, Marcia Ranglin-Vassell, Aaron Regunberg, Teresa Tanzi, and Moira Walsh. We applaud their commitment to moving women’s rights truly forward. If one of them is your Representative, please take the time to thank them. If your Representative is not on that list, call to let them know you are deeply upset at their vote for a bogus “equal pay” bill that promoted discrimination in the guise of supporting women’s rights.

Brown University Agrees to Pay Over $1 Million in Title IX Case for...

Statement on the Overturning of Roe v. Wade