The two pitbulls seized in October by North Kingstown officials despite the owner’s compliance with all relevant state laws will be returned home while the American Civil Liberties Union court case challenging the seizure of the dogs moves forward.

A Washington County Superior Court judge Friday found that the ACLU had a likelihood of success its claim that the state law establishing detailed procedures for dealing with "vicious dogs" preempts a local ordinance barring any “vicious” dog from being housed within a mile of a school or day-care facility. The judge therefore ordered the return of the dogs, Balou and Ozzy, to Kristy Miserendino and her family.

The ACLU filed the case, Defenders of Animals v. Sunderland, after town officials seized the dogs under the local residence restriction despite a ruling by a state panel that the family could keep the dogs if they took specified precautionary measures. A Town official informed the Miserendinos of the residency restriction only after they had decided not to appeal the hearing panel’s decision. The dogs have been held at the town shelter, which, the lawsuit points out, is also within a mile of a school. 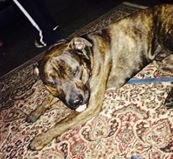