ACLU Sues to Release Mother of Two From ICE Detention

BREAKING 2/6/18 11:20AM:
Judge bars removal of Calderon outside Massachusetts while the suit is pending.  The judge's order is available here.

The American Civil Liberties Union filed a petition in federal court shortly before midnight yesterday to seek the immediate release of Rhode Island resident Lilian Calderon from an immigration detention facility. The lawsuit, filed in Boston by the ACLU of Massachusetts with support from the ACLU of Rhode Island, argues that Calderon’s continued detention is a violation of her constitutional right to due process and federal immigration laws and regulations.

The petition for habeas corpus seeks her release from custody and a court order barring immigration officials from deporting her until she is provided the opportunity to receive decisions on, and seek judicial review of, administrative remedies she is pursuing.

Calderon, 30 years old, is a Guatemalan immigrant and mother of two who has been detained by immigration officials since January 17th.  She has lived in the U.S. since she was three-years-old. The mother of two young children ages 1 and 4, Ms. Calderon was detained by ICE when she went with her husband, a U.S. citizen, to the Providence field office of the U.S. Citizenship and Immigration Services in Johnston as part of the process of applying for lawful permanent resident status. Calderon is currently being held at the Suffolk County House of Corrections, and she risks being deported at any time.

The petition argues that without the court’s intervention, “the government will continue to detain Ms. Calderon, and may undertake efforts to remove her, in violation of federal law, federal regulations, and due process—and at great risk to her already-traumatized children.” The petition further notes that in going to the interview in Johnston to seek to change her legal status, “Calderon followed procedures that the government itself has prescribed for avoiding such a tragedy. In effect, the government’s left hand beckoned her forward, and its right hand grabbed her.” 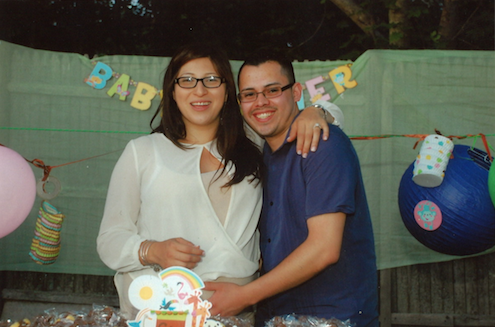 The ACLU petition notes the effect of the detention on Calderon’s two children:

“Petitioner’s abrupt detention has already caused significant harm to her four-year-old daughter and 22-month-old son. Her daughter has begun having nightmares three or four times a night, bursting into tears without warning, crying for her mother, and becoming frightened by brief separations from other family members. Her son can no longer sleep in his crib on his own and becomes distressed because his mother is not there to soothe him.”

A copy of the petition can be found here.

BREAKING 2/6/18 11:20AM: Judge bars removal of Calderon outside Massachusetts while the suit is pending.  The judge's order is available here.

The following are statements from participants in today's news conference announcing the filing of the petition:

Adriana Lafaille, ACLU of Massachusetts attorney: “Lilian Calderon came out of the shadows and tried to apply for her lawful status by following the process that the government created for people in her situation. Her sudden detention and separation from her husband and young children was arbitrary, unlawful, and inhumane. We will continue to stand up to protect freedom and basic fairness.”

Steven Brown, ACLU of RI executive director: "Snatching and detaining a woman with two young children who has lived in this country since she was three years old, is not only cruel and meanspirited, it borders on the sadistic.  We are hopeful that the courts will vindicate the important Constitutional rights at stake."

Martin Harris, attorney: "We have an emergency motion to stay pending at the Board of Immigration Appeals (BIA). They were last contacted this morning regarding the current status.  They did not answer the phone, but a detailed message requesting an update was made separately. We have filed a motion to reopen at the BIA requesting that they revisit the final order of removal that issued in 2002 and the subsequent motion to reopen in 2008.  We've also requested USCIS to conduct an internal review of their 2017 denial of relief via DACA for Lilian Calderon.  A request for her release has also been made with ICE, along with a separate request for stay of removal. We are asking ICE to consider her release including electronic monitoring because she is not a flight risk of danger to the community."

Luis Calderon, Lilian's husband: "Ever since that day, Natalie asks me why her mom has left... I've lost my best friend. I'm asking for her release because she needs to be with her family, and her children miss her.  I don't understand why this is happening when we thought we were doing everything right to keep our family together."

Gabriela Domenzain, Director of the Latino Policy Institute: "Our immigration system is broken, and it’s victims are Rhode Island families just like Lilian and Luis’s. Luis has shown more composure, strength and resolve than I think many of us would be able to muster if the love of our life was vanished and put into prison. As a state, we need to be prepared to help families stay together.  There are steps we can take at the state and policy level that we will be exploring but the priority today is to get Lilian out of prison, and we’re praying that what the ACLU did today, will produce that result."